One of the world’s most well-known tourist attractions, it’s hard to believe Wall Drug Store got its start with something many wouldn’t even turn their heads at today … the promise of free ice water. But in fact, the Husteads turned free ice water into a million-dollar idea with a little determination, quick thinking and a lot of signs.

Signs with catchy jingles like “Get a soda . . . Get a root beer . . . turn next corner . . . Just as near . . . To Highway 16 & 14. . . Free Ice Water. . . Wall Drug” drew weary travelers into the small-town drug store to enjoy a refreshing break. Today, more than 2 million visitors a year stop at the popular roadside attraction for a meal or activity, 5 cent coffee, and ice water – which is still free. 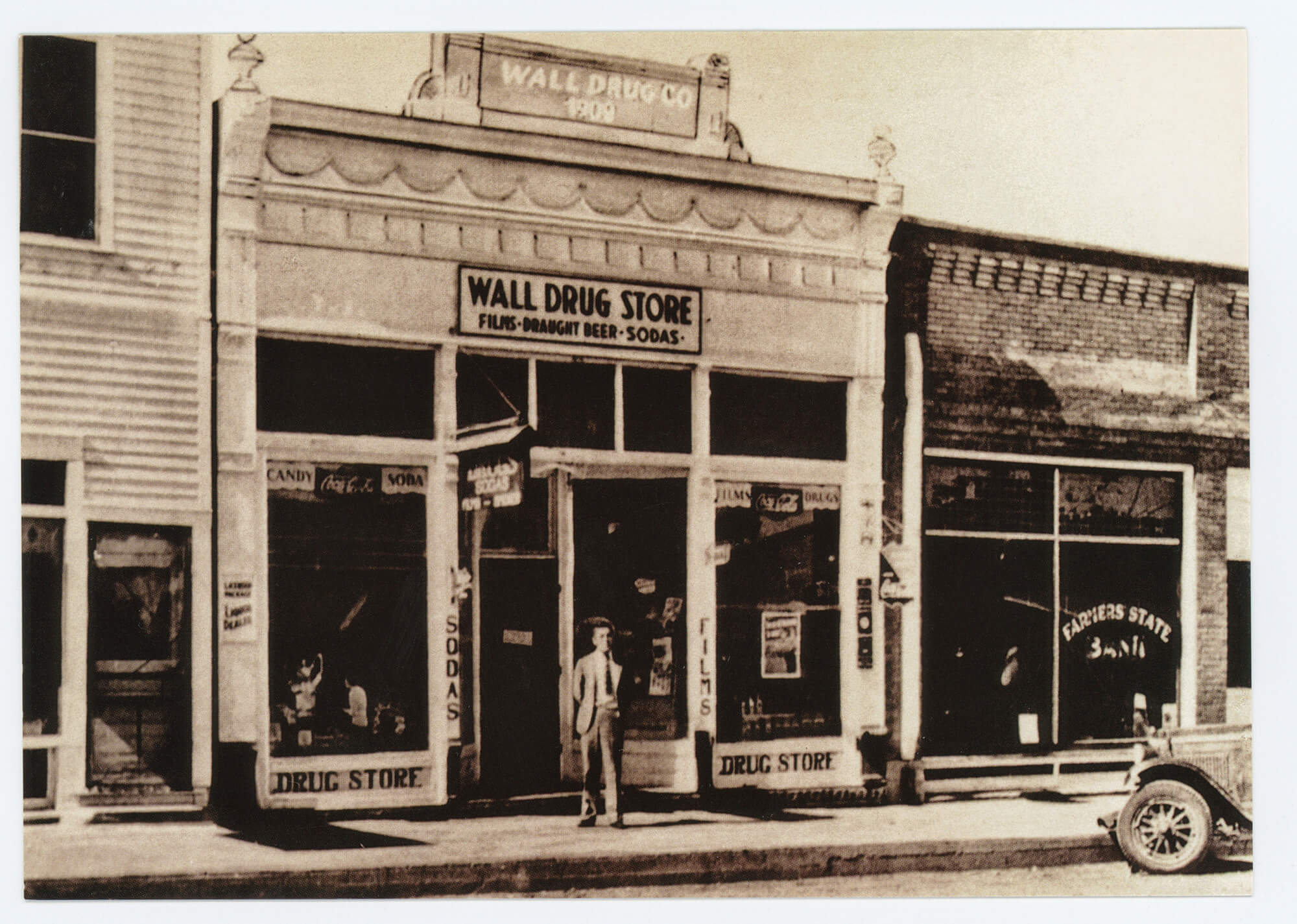 Located in Wall, South Dakota, Wall Drug has always been a popular stop on the road to the more populated areas like Mount Rushmore or Rapid City. As a matter of fact, when the United States Air Force operated the Minuteman missile silos east of Wall, the Hustead family offered free coffee and donuts to the service personnel as they traveled to and from Ellsworth Air Force Base near Rapid City. Wall Drug honors the men and women in the armed services by providing them free coffee and donuts to this day.

Read Ted Hustead’s story about the genius behind what made Wall Drug Store into the roadside attraction we love and celebrate around the world.

The Story of Wall Drug as told by Ted Hustead

It was December 1931. Dorothy and I had just bought the only drugstore in a town called Wall on the edge of the South Dakota Badlands. We'd been open a few days, and business had been bad.

I stood shivering on the wooden sidewalk. In this little prairie town there were only 326 people, 326 poor people.

Most of them were farmers who'd been wiped out either by the Depression or drought.

Christmas was coming, but there was no snow, no sparkling lights — just viciously cold air. Out on the prairie the cold wind whipped up dust devils. I could see a Tin Lizzie chugging along the two-laner. Suitcases were strapped to the running boards. Someone's going home for the holidays, I thought to myself. I wished they would stop, just for a cup of coffee, but they didn't. Here on Main Street, no one was out.

When I went back inside, I turned the light off over the soda fountain and joined Dorothy and our four-year-old son Billy in our "apartment", a room we'd made by stretching a blanket across the back of the store.

I had graduated pharmacy school in 1929, and after two years of working for other druggists, I knew that Dorothy and I had to find our own store. My father had just died, and he'd left me a $3,000 legacy. I'd work with that. 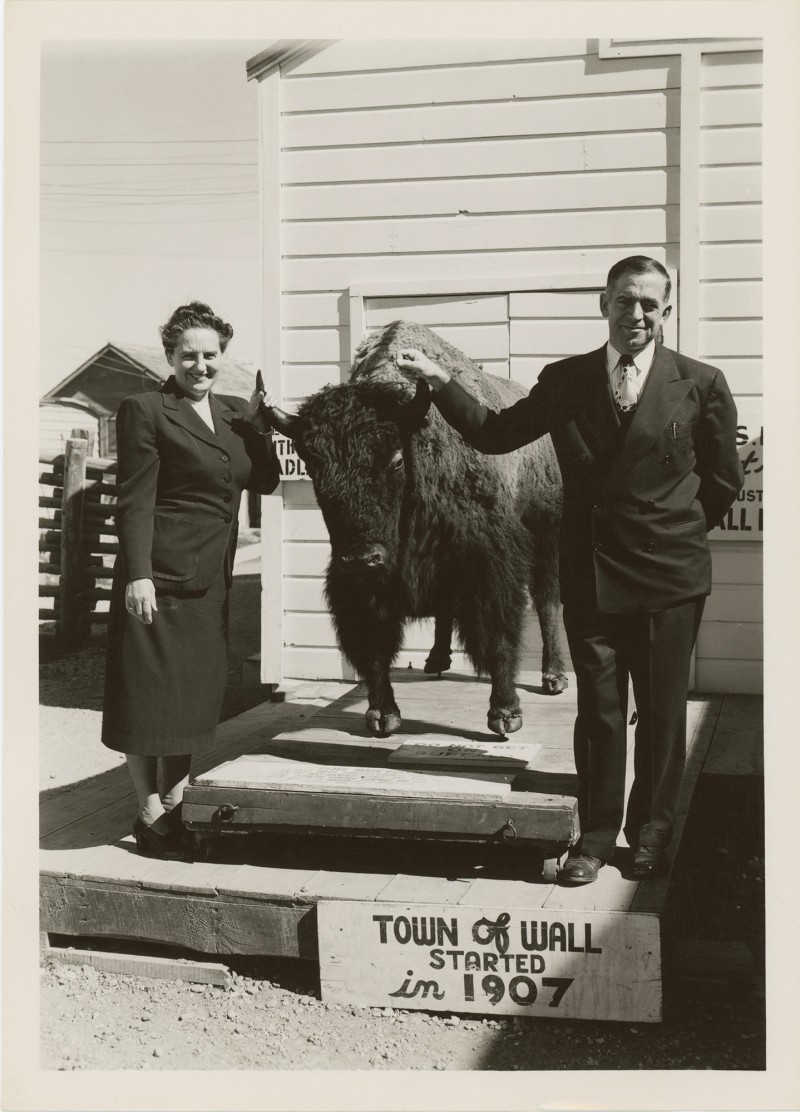 We were living in Canova, South Dakota, when we began our search, covering Nebraska and South Dakota in our Model T. As we searched, we were sure of two things: we wanted to be in a small town, and we wanted the town to have a Catholic church. In Canova, the nearest parish was 20 miles away. We wanted to be able to go to mass every day.

In Wall, where the drugstore was for sale, we found both a small town and a Catholic church. And when we talked to the priest, the doctor and the banker, they all told us that Wall was a good place with good people and that they wanted us to come live there.

Dorothy and I were excited about Wall, but when we got back home and told our families about the plan, we found them skeptical.

"That town is in the middle of nowhere," a cousin said, "and furthermore, everybody there is flat broke busted."

My father-in-law was understanding, but even he said, "You know, Wall is just about as Godforsaken as you can get."

The first few months went by and business didn't improve. "I don't mind being poor, " Dorothy said to me. "But I wonder if we can use our talents to their fullest here in Wall."

When Dorothy spoke of talents, my heart sank. My wife had a teaching degree and had taught literature in a Sioux Falls high school. Was I being fair, making her work in this prairie drugstore?

But the next minute Dorothy said, "We shouldn't get down, Ted. I'm sure we can use our abilities fully here. We can make this place work!"

Dorothy's optimism lifted me. I said to her, "Five years, Dorothy, that's what I think we should give to this store. Five good years, and if it doesn't work by then, we will. .."

"Don't worry about then," said Dorothy. "We'll make it go. And just think, Ted, pretty soon that monument at Mount Rushmore will be done, and then there will be an endless stream of people going by. I'm sure they'll visit us!"

We weren't starving, it's true, and we'd begun to make good friends in Wall. Our pastor, Father John Connolly, had become a tower of strength, helping us keep our faith strong. And we had worked hard to serve our neighbors well. Filling prescriptions for a sick child or an ailing farmer made me feel that I was doing something good. I also studied some veterinary medicine on my own so that I could help out farmers when their stock were ill. 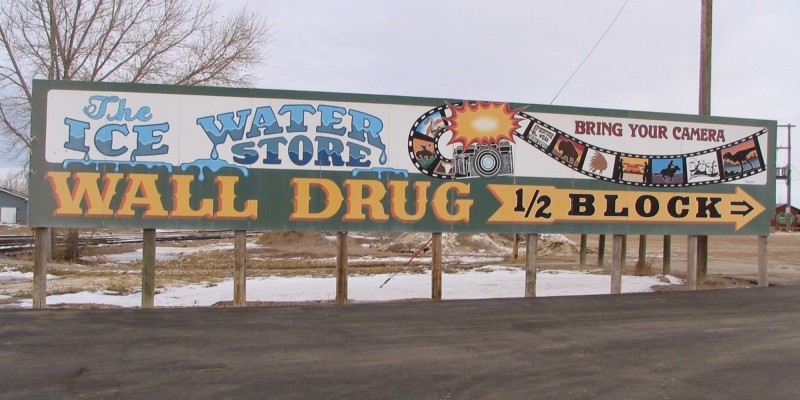 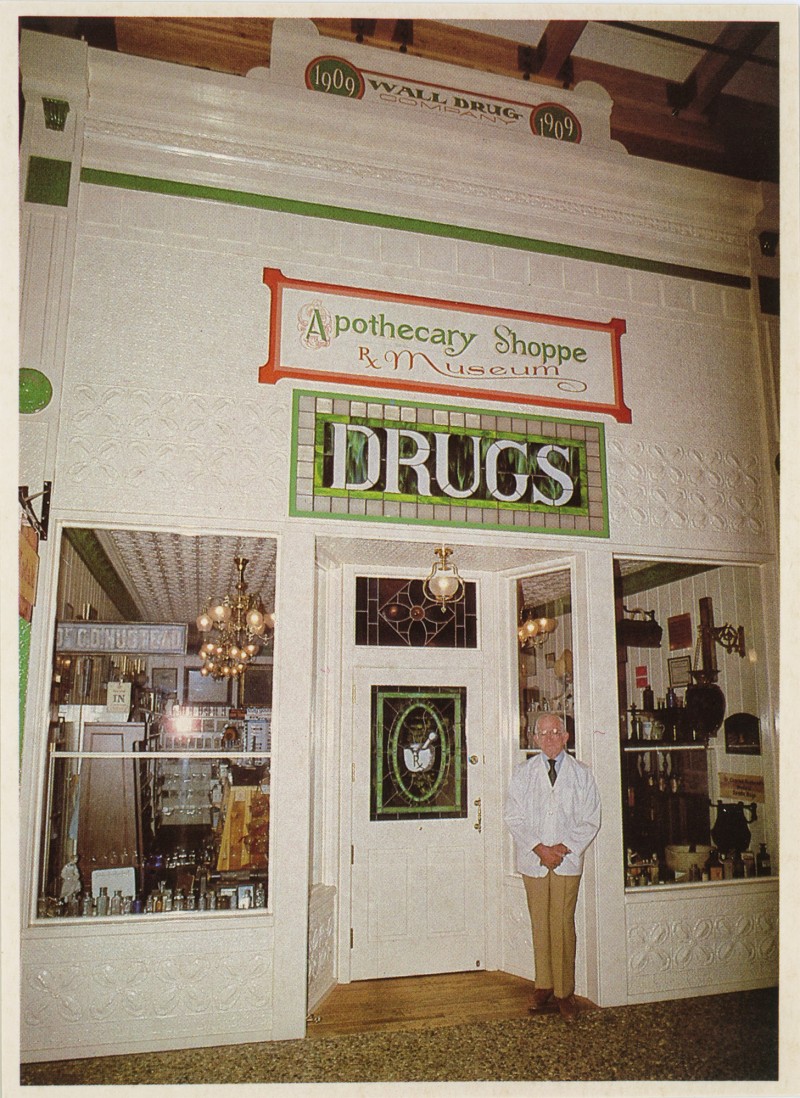 But all of this didn't seem to be enough. I still spent too many hours looking out the store window for customers who never showed up. I felt I was wasting too much of my life watching people pass by. Maybe, as Dorothy's father had said, Wall was Godforsaken.

By the time the summer of 1936 came around, our business hadn't grown much at all. Our five-year trial would be up in December. What would we do then? Along with nine-year-old Billy, Dorothy and I now had a one-month-old daughter, Mary Elizabeth. What hardships was I putting them in store for?

One hot Sunday in July, though, a great change swept us up. It started quietly, in the deadening heat of an early afternoon, when Dorothy said to me, "You don't need me here, Ted. I'm going to put Billy and the baby down for a nap and maybe take one myself."

I minded the empty store. I swatted flies with a rolled-up newspaper. I stood in the door, and no matter where I looked, there was no shade, because the sun was so high and fierce.

An hour later Dorothy came back.

"No, it wasn't the heat that kept me awake," Dorothy said. "It was all the cars going by on Route 16A. The jalopies just about shook the house to pieces."

"No, because you know what, Ted? I think I finally saw how we can get all those travelers to come to our store."

"Well, now what is it that those travelers really want after driving across that hot prairie? They're thirsty. They want water. Ice cold water! Now we've got plenty of ice and water. Why don't we put up signs on the highway telling people to come here for free ice water? Listen, I even made up a few lines for the sign: 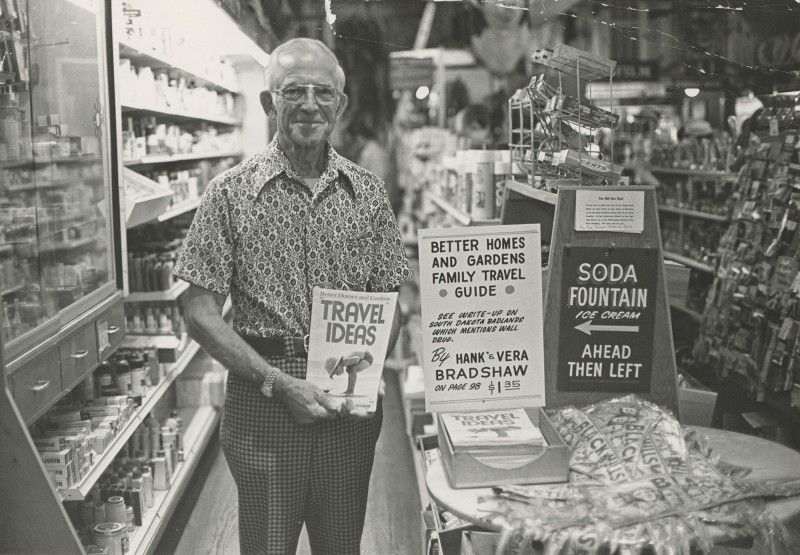 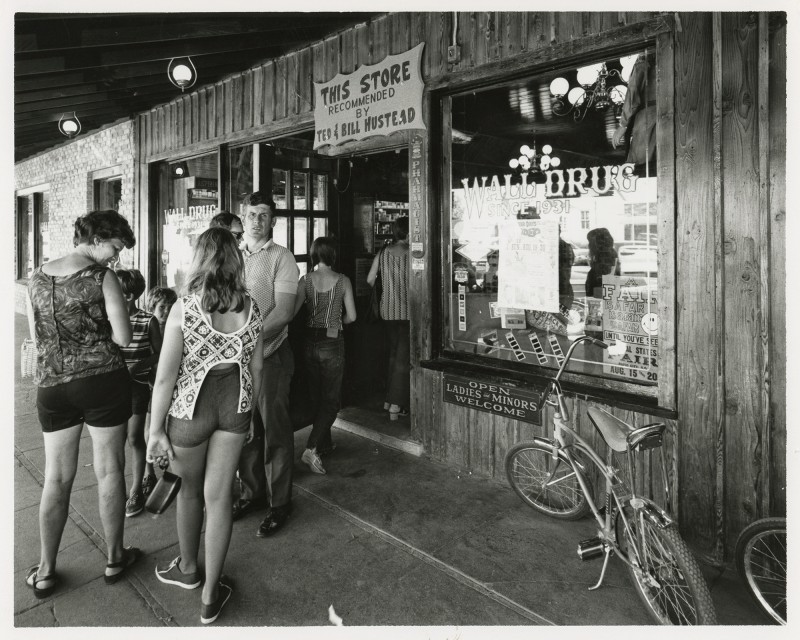 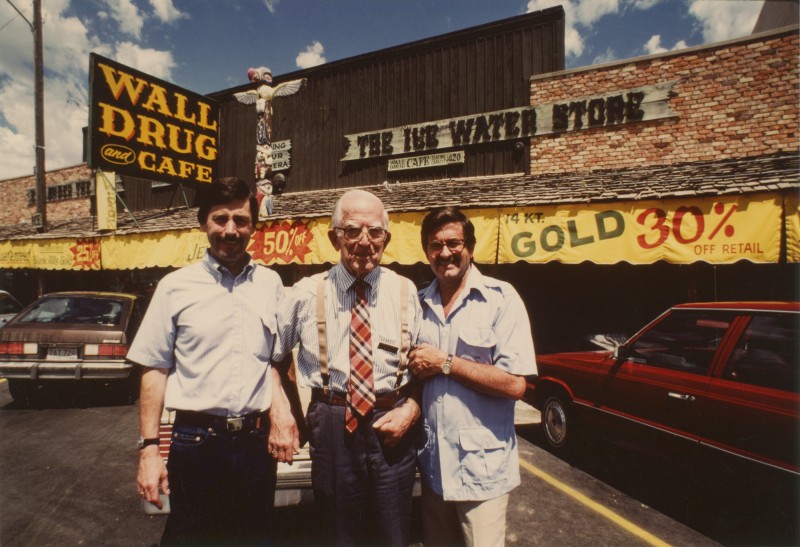 It wasn't Wordsworth, but I was willing to give it a try. During the next few days a high school boy and I put together some signs. We modeled them after the old Burma Shave highway signs. Each phrase of Dorothy's little poem went on a 12 by 36 inch board. We'd space the boards out so the people could read them as they drove.

The next weekend the boy and I went out to the highway and put up our signs for free ice water. I must admit that I felt somewhat silly doing it, but by the time I got back to the store, people had already begun showing up for their ice water. Dorothy was running all around to keep up. I pitched in alongside her.

"Five glasses of ice water, please," a father called out.

We ran through our supply of cracked ice. I began chiseling more off the block.

"Say, good sir," one traveler said in a Scottish brogue, "we're going all the way to Yellowstone Park.

Would you mind filling this jug with your water?"

"Hey this free ice water is a great idea," said a salesman, sidling up onto a stool. "How about selling me an ice cream cone?"

For hours we poured gallons of ice water, made ice cream cones and gave highway directions. When the travelers started on their way again, refreshed and ready for new adventures, they gave us hearty thanks.

When the day was done, Dorothy and I were pooped. We sat in front of the store, watching the sun set, feeling a cool breeze come in off the prairie. In the summer twilight, Wall looked radiant. It looked like a good place to call home.

"Well, Ted," Dorothy said to me, "I guess the ice water signs worked."

They surely did work, and we've never really been lonely for customers since then. The next summer we had to hire eight girls to help us, and now that the store is in the good hands of Rick Hustead, Wall Drug draws up to twenty thousand people on a good summer day.

Free Ice Water. It brought us Husteads a long way and it taught me my greatest lesson, and that's that there's absolutely no place on God's earth that's Godforsaken. No matter where you live, you can succeed, because wherever you are, you can reach out to other people with something that they need! 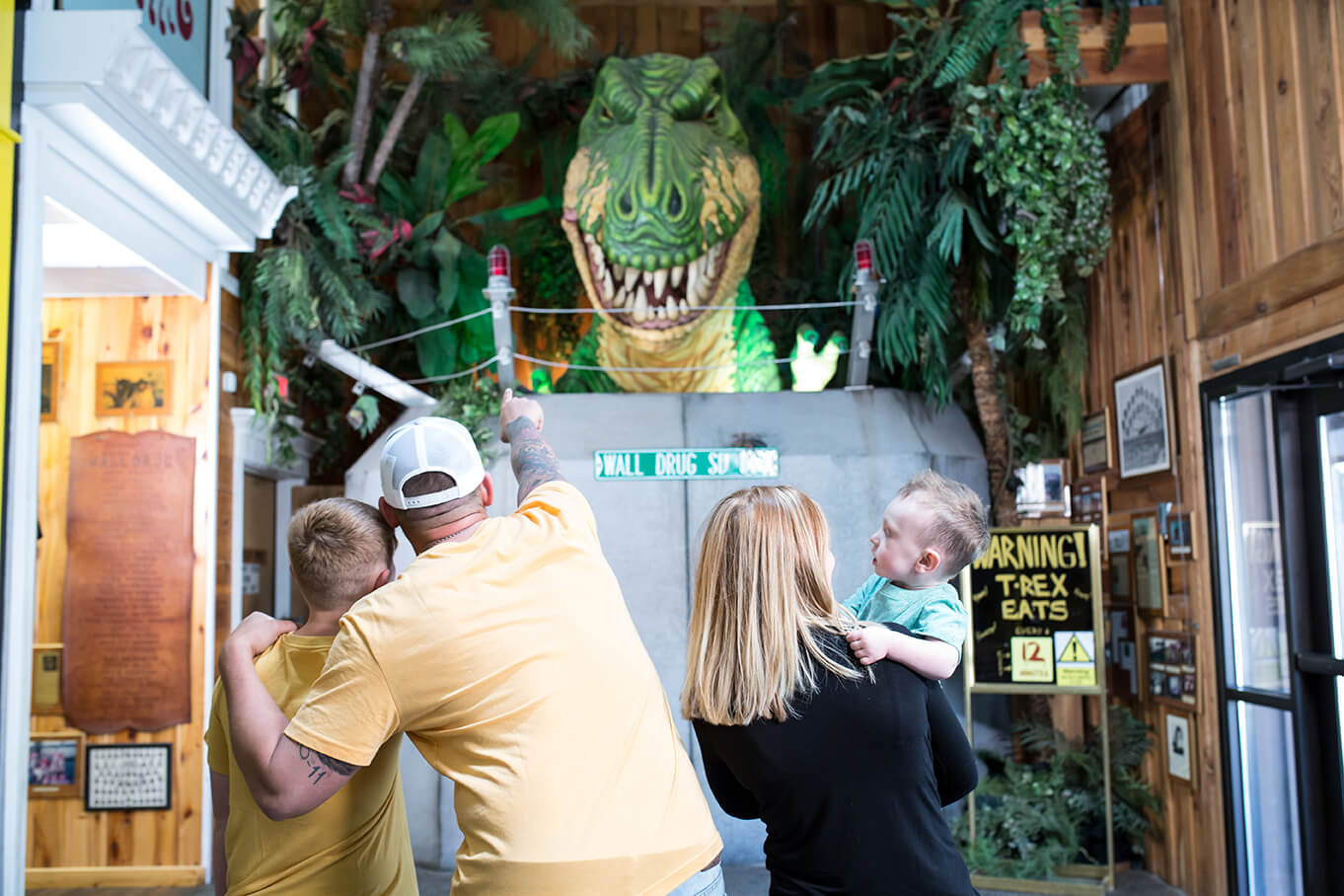